Sometimes my grandfather would call me Penelope.  I don’t know why, maybe he just liked that word.  This week I did a Penelope thing.

I knitted a round yoked vest, my first round yoked garment.  All the while, I was worried it might be too small, but I decided if it was, I would steek it, add bands and then I could use the nifty clasps I bought a while back in Estonia.

For some reason, I was using double pointed needles instead of circulars.  The reason had to do with converting American to metric sizes.  After my husband used a clever electronic device to measure my 6’s and 7’s, I found out that size 7 is 4.55mm, definitely close enough to 4.5mm.  The dp’s meant I had ladders, as hard as I tried, I could not seem to eliminate them.  There was a vague hope they would disappear with time.  Very vague.  When I tried on the finished garment, it was indeed too small which accentuated the ladders.  I realized I would not be able to bear wearing the ladders, so I am ripping it all out and will try again, creating a bigger size, since I had already knit the biggest on the pattern.

Penelope sacrificed her work and time for the sake of a higher ideal.  Perfection in knitting is not that elevated of a goal, but I was not happy with a flawed garment. 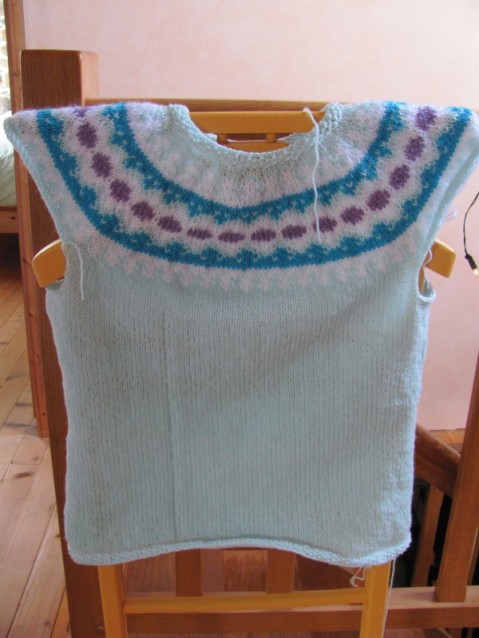 This no longer exists.