Here is the Icelandic-inspired sweater vest.  When it was about 3/4 done, I had my husband try it on, such as he could with needles and stitch holders and it really was a bit too tight, so I took it back to the state shown in a previous post.  I was afraid to have him try it on this time, but whew, a sigh of relief, it fits.

This year the association Couleurs de Bretagne is setting a theme for each out-of-season month as a means of maintaining communication and being active.  This month’s theme was snow.  I had to get a bit creative as we haven’t had any yet and none of my old pictures inspired me.  I decided to go out of the box and put myself (some aspects) into snow globes.

Down in the depths of the back of my mind since the 1980’s, there has been this article about Iceland in a knitting magazine, admiration for Mme Kristin Gestsdottir (on the right) who could knit a sweater in 2 days.  OK, it is thick yarn but still!

I would have liked to go to this store, Álafoss, but things did not work out that way.  What could a knitter bring back as a souvenir from Iceland but yarn?  We found our way to a store in Reykjavik, The Handknitting Association.

They were quite helpful, offering free patterns, but there were none for a man’s V-necked vest. They do high round yokes traditionally. I decided I would make up my own pattern, Icelandic inspired for lack of being genuine. 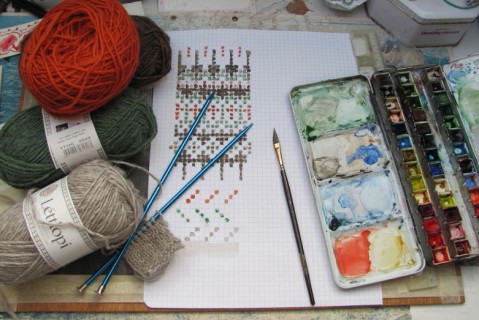 Now if you’ll excuse me, I have a few more rows to knit.

Some random and sundry shots. 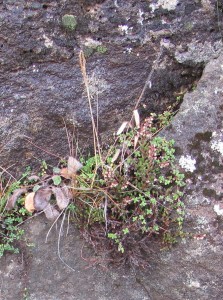 Vegetation in bloom in November!  Below–gaultheria with berries. 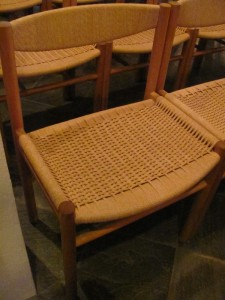 The way they make beds.  Upon entering the room, I thought, oh, no, that duvet is quite narrow, some body parts are liable to be sticking out in the cold.  But no, the duvets unfold to be plenty wide and the piece across the bottom holds them in place, since they don’t have a tail to tuck in like ours do.

The view from our hotel window the last night, Reykjavik.

The name itself tells you there is a lot of this element–ice.

I could tell by looking at the map that there was a lot of ice because the whole middle of the country is white which means glaciers.  After a couple of days, I realized I was not seeing snow-covered mountain peaks, but glaciers. 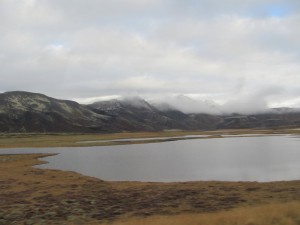 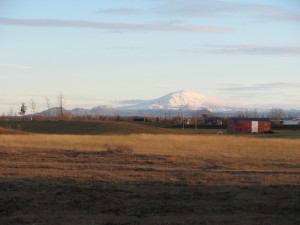 I was not expecting to see icebergs!  I thought one had to take a boat to the Arctic or Antarctic to do that.  The beauty of this site is unimaginable.  It reminds me of the chaos of rock near us in Huelgoat, Brittany, only blocks of ice.  Under the glaciers are volcanoes.  Things get hot and bothered from time to time, glaciers flood, moving every thing in their path on the way to the sea.  Icebergs break loose.  They eventually find their way out into the ocean where the sea washes some of them onto this black sand beach.

It was so beautiful I felt tears arising.  D.J., I said, get a grip!  Don’t cry over melting ice.  As I rejoined some members of our group, another woman said she had been on the verge of tears also.

This is a sort of iceberg cemetery, what’s left of the ones that get washed up on shore.

This one looked liked a mushroom so I pretended to be an elf.  Elves are part of Icelandic culture and mythology. 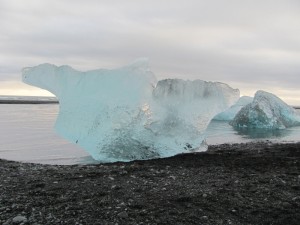 Our primary purpose in this choice of destination was the hope of seeing aurores boréales, northern lights.

There is, of course, never any guaranty of a natural phenomenon occurring.

We visited a center to learn about it.

This was about 9:10 in the morning, not quite light out, as you can see.  The warm and cosy part on the sign in the window tickled me.  It was very informative, explaining how they are caused by emissions from the sun which are then attracted to the earth’s poles and deflected in the atmosphere.  So one needs a good probability, no clouds, and no light pollution.

The first night of our stay we were in Reykjavik and it was raining on and off.

The second night, in a smaller town, we went outside around 9 in the evening to no avail.

The third night we tried again, spending about 1 1/2 -2 hours out in a field.  The hotel had loaned us all blankets and headlights.  I had brought along the tripod and as nothing more interesting seemed to be appearing, I took a photo of the other people taking photos. This was in full darkness, a 15 second exposure, 800ISO.

This person reminded us that they had said at the center that the camera is often better at picking up the lights than our unaided eyes and he was getting some faint green trails.  So I took a photo at 10 seconds.  It still looked pretty much like broad daylight even though it was fully dark. 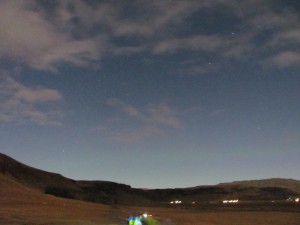 Another shot.  You can see the people who had given up heading back to the hotel. 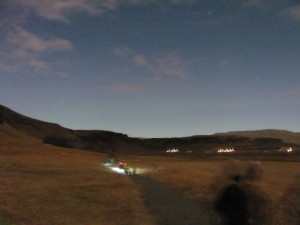 There is a very faint wafting of green a little bit above the horizon that can be distinguished when the photo is enlarged.

The fourth night, it was snowing and the fifth night we were back in Reykjavik with 0 probability, even the tours were cancelled for that night.

So that is as close as we got to seeing the Northern Lights.

Our new friends, co-travelers in the group, were having a lot of fun with their drone.  (So did we.) 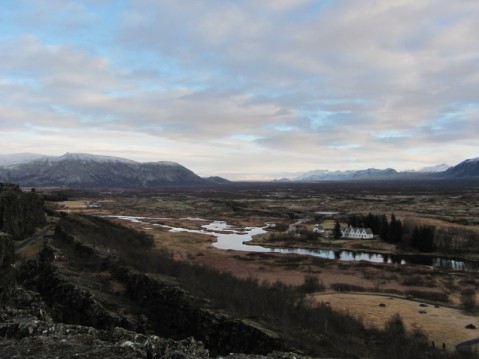 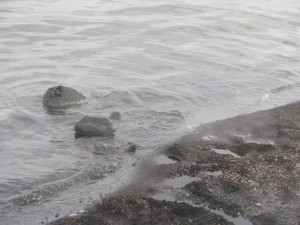 The bubbling to the right of the rock in the middle is a small geyser, a hot spring that enabled the bread to be baked.

Waiting for the geyser to spout.

This is a video taken by our friends.  I had trouble with our camera’s batteries.

There was steam escaping from many places at the site of this magnificent geyser which shoots up about every 5 minutes.

I went up above the falls to get this shot showing the depth of the fault.

We were warned not to turn our back to the sea. 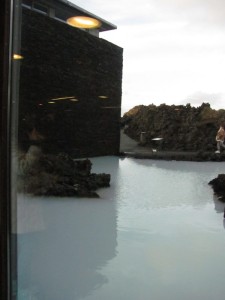 The last day we visited the Blue Lagoon spa and bathed in its warm, silica-rich water.  They use water from hot springs to heat their houses.  After they have taken some of the heat, there remains mineral-rich water which would stop up the pipes so they put it in this lagoon, mixed with some sea water.  It was 38°C.  I didn’t think I would like it but it was wonderful.  It is beneficial for skin and joints.  I wouldn’t mind jetting over there regularly.  🙂

Today I will talk about rocks.  Iceland is a new land, relatively speaking, formed by volcanoes and glaciers.  Tectonic plates are nudging each other.  Pressure builds, lava and ash spew forth.

This is a fault line between North America and Europe.

Here you can see strata.  The rocks have different formations depending on temperatures of lava, water, time, cooling…

Incidentally, this yellow colour was quite present in the Icelandic landscape of November. 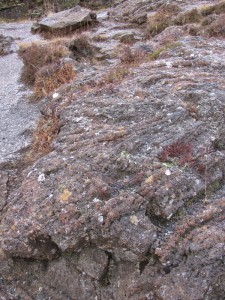 How did those rocks get ripples?  I found the answer when we visited the Earthquake and Volcano Center. 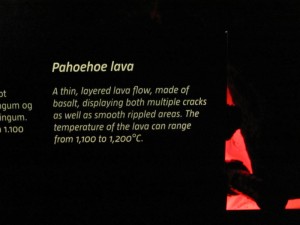 Rocks jut forth from land and sea.  Many have legends, myths, associated with them.  The long Icelandic winter nights give rise to fertile imaginations.  Icelandic people read and write many books. 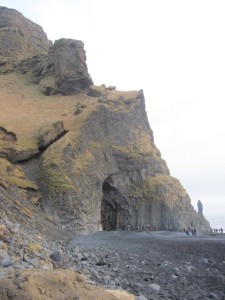 This is the site of “les orgues basaltiques”.  This formation reminds one of organ pipes.  The black sand is from lava.  The haze that day was the wind stirring up volcanic dust.

There were miles and miles of lava fields, covered in moss.  I was starting to get a bit itchy with that, feeling smothered, wanting to get out my little 3-pronged garden tool and scrape some away so things could breathe. 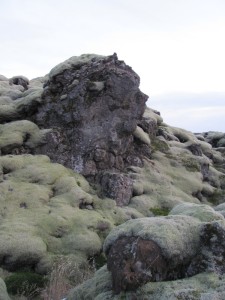 Then we got out of the bus and strolled among the stones and seeing the moss up close, it took on another dimension, I could see the individual stems, the other plants growing with it and I felt an appreciation for the beauty of it all.

We are just back from a trip to Iceland.  I plan to do several relatively short posts about it.  First I will talk about food.

This was a plate of Icelandic specialties, fish and smoked lamb, served on different breads.  The little cubes in the middle with the flag are marinated shark, very strong taste as I had read, but I wanted to see for myself.  My favorite here was the cod mixed with mashed potato, second favorite the salmon with cottage cheese and dill.  Yes, they have lovely cottage cheese.

They can bake bread in the ground close to hot springs.  It is similar to a steamed pudding, not really sweet though.  It is a rye bread.

We enjoyed the freshly baked bread (it does spend 24 hours in the ground) with Icelandic butter (unsalted). 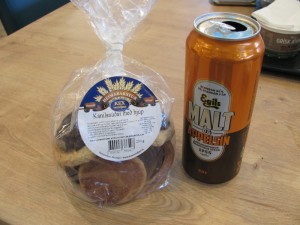 We chose some items at a supermarket.  I knew the cookies would have cinnamon and thought the can said something about apple and malt.  The drink turned out to resemble Sprite or Canada Dry.  I am trying to replicate the cookies.

This is a crowberry plant.  There were berries to be found.  They are quite small, black, similar to huckleberries.  Our guide said they usually make juice with them because they have so many seeds.  Seeds?  Can I maybe grow some?  Around here, some other animal would have eaten them all but apparently there are very few wild animals in Iceland.

There were splendid spreads at the hotel breakfast buffets—the surprise box like in the States contained scrambled eggs, baked beans, sausages.  There were several preparations of herring, salmon, cereals, seeds, nuts, dried fruit, different breads, Wasa-type crackers, cheese, cold cuts, cucumbers, tomatoes, fruit, juice, their unique dairy products which are similar to yogurt/fresh cheese.  We often enjoyed soup for lunch which was was served with a hefty slice of bread and a pat of butter.