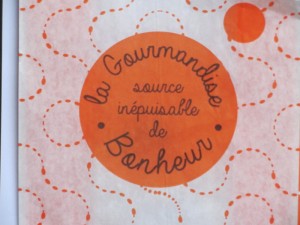 It started with a sachet from a pastry shop.  The motif caught my eye, but the truth of the matter was “not quite right”.  While one can often find pleasure in eating good food, it is not really an inexhaustible source of Happiness.

I wondered if I could find the letters for the word love (amour) in “gourmandise” since that is the true source of real happiness.  Yes, I did.  Then I filled the holes with hearts.  I also had a bit of a donut box I brought back from the States; “share jelly donuts” had tickled me right away.  This orange must be an international choice of colour for gourmandise.

This reminds me of the work to be done on oneself, changing so as to be loving and thus transforming the world.  I modified the word “compostable” to read” réalisable” because it is entirely possible.

A touch of Le Rustique, an orange one that comes with Muenster cheese.  Hmmm, Muenster with jelly donuts, how would that be?

I have been having fun with mixed media lately, often inspired by LorriMarie Jenkins.

This poster was created by Eric D. and published in comment 05jan19 203C98

…”Your poster, over which flies a large white bird, exalts immaterial forces, despised by our age of heavy materialism, forgotten interior forces that we must awaken in order to rejoin the Father’s Power (RA 12/4), which are love, forgiveness, peace, the heart’s intelligence free from all prejudice, in the background a sun rising over humanity’s tempest, these blue-gray waves that have been trying to drown our inner powers for centuries.  This poster evokes for me the resurrection of love and absolute freedom so finely exalted by the Sermon on the Mount and that the Nicene Council replaced with the invention of the trinity—a god with three heads (RA 23/7)—and redemption by the cross, woolly myths no more menacing for Constantine’s imperial domination than Santa Clauses or Olympian fairies, while the activities of love, forgiveness, non-judgment, liberty, would have given the basic citizens a superior power since it would enable reaching the Power of the Most High.

From that point were sent to the desert or behind monastery walls, which were in fact prisons, those who kept up within themselves those powers, the image and likeness of the Creator (Genesis 1/26).  As for us, the Father brings us out of the virtual desert or monasteries of faith, He causes us to emerge like spume from the tempest blown unceasingly on humanity by the powers in place so as to better dominate it.  We cause to spring forth this impalpable treasure of love and absolute liberty like a sword and it is the Father’s Arm that lifts it (RA 35/14) over the world.”

Intelligence of the heart

Free from all prejudice

The rising of a dawn over a new humanity is the goal of penitence, action of changing one’s life (RA 30/11) and the world to Good. The truth is the world must change (RA 28/7).

…If one can be certain of brother Michel’s faith and hope, what about his power?  With this question one can understand the relative lack of success of The Revelation of Arès.  We find ourselves back with the same problem as the Sermon on the Mount.  Are we going to adopt a theory from someone who takes punches without responding although he has the strength of a carpenter?…

Excerpt from the reply:

…And now for power!  Jesus could not, I cannot, as God can, extend a hand towards space, set the limits of infinity and say, “Let a thousand suns be!” and a thousand suns are!  Only God can do that and God… we don’t know what He is.  But I, human, the image and likeness of the Father (Genesis 1/26), a very small scale model of the Father, I can extend my will, make it envelope my whole being, force within myself a determination of my existence and say to myself, “From now on, you will be penitent, an apostle of the Father, an artisan of Good in this world; you will change your life (RA 30/11) and in doing so, you will participate in changing the world (RA 28/7),” that I can do, it’s my own power, my atom of power like I am an atom of God, of All That Is.  That is what we are talking about when we evoke the spiritual power of mankind.  We are not speaking about a material force, but rather an intangible force, the force of one’s will— SO THAT WE DO YOUR WILL (RA 12/4).

We think we evolve in a world of things and forces that are precise, scientific, psychological, measurable, but that is not true.  Mankind is in a nature of associations that are vague, derivative, immaterial, one of the aspects that differentiates it from animals and vegetation.

Every morning I say to my spouse, “I love you,” but I am incapable of explaining the inner rush that I feel when I tell her that, incapable of saying why if she were to die there in front of me, I think I would die with her, incapable of telling her why our lives are joined to such a degree.  She feels the same, perhaps even stronger.  This love force is a power.  Between us and those around us there are significant forces which we are incapable of knowing in a rational way.  But these forces exist.  That is where one will find our power.

Deep Cause of Terrorism

“The deep cause of Muslim terrorism is not religious. It’s hate for western civilisation.

But this problem is replicated by another: We westerners don’t love ourselves either.  Our missionaries are quite conscious of this reason buried deeply beneath other arguments.  The people they meet don’t love themselves/each other, don’t expect much from themselves, in other words there is a painful general apathy.  Should I say a general depression?  …  I am going to tell you why they feel this disgust or general apathy.  It’s because they have completely lost sight that mankind has a much greater need for grandeur, interior beauty (RA 12/3), superior ideals, magnificent, of heroism (RA xxxv/4-12), love for one’s neighbour, forgiveness, true freedom, than for social security.  That is what The Revelation of Arès reintroduces into our minds and that is what we seek to reintroduce to the public mind by assembling a small remnant (24/1) of heroes who go into the streets to remind humanity of this.  Yes, we must fish out our beautiful ideals, particularly those of The Sermon on the Mount, from the gutters and sewage pipes where they have been abandoned.”

The Key to Good in the World

In His immense Wisdom, with The Revelation of Arès, the Father gives us a very simple key: penitence, to unlock the door that will permit Good to enter the world.  Perhaps we do not insist enough on this simplicity as realization of His Design.  Mankind expects the complications and obscurities of the legal system—laws are the base of the legal system and there are so many, even jurists are becoming lost.  Man has in his heart, in love, the code which enables him to put away in a closet all legal codes.

We must awaken love, make a hole in the indifference, coldness, laziness, ice…prelude to frozen specters…so that Good, too far removed, may return.  What has man become?  Not only condemned to die—each of us is, only the moment of execution varies—but miserable, hungry for peace and happiness yet incapable of giving himself that peace and happiness.  Everything becomes quite complicated in this world, so much so that this complication agitates and derails the mind, prevents the fulfillment so necessary to happiness.  I was having lunch a short while ago with my grandchildren and I said to myself: they are preparing their baccalaureate exams, soon they will enter institutions of higher education, and the worries of life will begin.  The preparation of peace, the solution to the worries, is in the love they will give, because one only receives love if one gives love.

“… “ I turned my anarchy into anarkhia, a constructive insurgence,” you say, brother Angel, and it is absolutely true that the first head to be brought down is one’s self, which is the source of pride, that is to say, of the error which consists in believing oneself to be superior to others and thus killing Love.

Pride is ice, the man unfurled over himself freezes: nothing passes from him to the other.  Love is the Fire, the Wind of the thaw.  There cannot be anarkhia without Love and there is the difficulty, I know.  Anarchists believed they were serving anarchy by killing.  Alas, they were only in anger and anger, like pride, imprisons the being under the glacier of a long cold pressure.  Reading works about anarchy, I did not find any allusion to what seems to me to be essential for developing a happy powerful anarchy, Love.  One must admit that most anarchists are not believers, but still, I found that bizarre.

We must live with the hope that man be cured from his illness of submission.  Why does man weaken himself thinking he absolutely needs rulers, laws, coercive protectors?  It is an illness, one of those deep illnesses become congenital, inherited by the poor choice made by Adam (Revelation of Arès 2/1-5).  We must give humanity the hope of being cured from this evil through which politics and religion live.  Anarkhia, when it will begin to be put into practice in small human unities like it is practiced in our missions, will be a celebration following millenniums of being deprived of liberty and independence.  They say that we only use 10% of our brain, but has anyone conceived the notion that the inactive 90% is the result of constraint of the mind, thought?

This thought, these capacities finally liberated, yes, it is penitence that will give it to us.”

djdblogginghere
Create a free website or blog at WordPress.com.