The Last Contest of the Season

Yesterday was the last contest of the season for Couleurs de Bretagne.  It was held at Concarneau, a bit of a drive for me, 87km, and they were forecasting rain, but I went anyway.  I am glad I did.  It only rained a little bit on my sandwich.

Beforehand, I checked out images so as to foresee a possible subject and I had settled on a building with clock faces and bridge with water that goes out with the tide.   I had in my mind “time and tide wait for no man” and when facing hunger or death man’s chin trembles, each one has just enough time to repent (from the Revelation of Arès).

I had no idea that I would learn that day of the passing of a member of the association the day before.

My chin trembles a bit, even though I have faith, because I would rather no one die.  I know what the solution is and I know it will take a long time for humanity to climb from the depths to which it has fallen.  The solution is what is called penitence—that is changing oneself to be Good.  The means are love, peacemaking, forgiveness, freeing oneself from all prejudice, developing the heart’s intelligence.

In myself, as in my painting, I can see qualities and faults, but I will keep on working.

My chin was not trembling from hunger as I had my sandwich and then I found an ice cream shop. 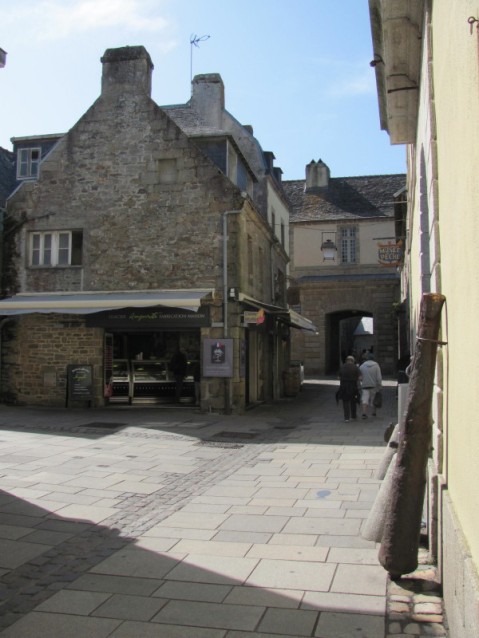 The old town center of Concarneau is a walled city. Here is a view from the ramparts:

“Shout everywhere, ‘Earthly life is short; happiness is not measured in years, it is measured in eternity; every man barely has time to repent, for the regrets of the specter only add torments to its torments!  Listen to the Word That I received and save yourselves!’ ” RA 36/23

“(When facing) death (and) hunger man’s tongue hangs down, his chin trembles; (but if like) the veprell he holds (to) My Lip, (he becomes) the brother, (he) drinks the Fat Water–It Which does not dry up–, (the brother) flies high (over) the grave.” RA xxii/15-16

The original blog entry in English can be read here:

We live in a world that is inhumane, inhumane in the sense of opposite to human when it could be applied to the human linked to the spiritual forces from which he sprang – suddenly or slowly, it doesn’t matter – from animality metabolised into humanity by the five gifts given by the Creator, we don’t know when : Speech, Individuality, Creativity, Love and Liberty.  We believe we still have Speech, Individuality, Creativity, Love and Liberty, but we only have the residue.  We have become, reverted to, thinking animals, but animals.  Humans have disappeared except for a few that we call saints, rare, or geniuses, rare, or “original” when they are unknown.

We thinking animals have remains of the languages or language spoken by our far-off ancestors.  As the thinking animals that we call today men have compensated their terrible decline by inordinate pride (RA 14/2), we are quite proud of our languages, our writers, orators, grammarians, encyclopaedists, who are great manipulators of language, whereas we should be in tears over the little we have left if we were conscious of the little we still know how to do.

A few days ago I was watching a documentary on the Arte channel about black holes, and I was flabbergasted by the expert’s manner of being so sure of herself, unruffled assurance, who explained, like a notary reading a deed of property, the mechanism of a star’s death which will become a black hole whose phantom hidden in shadow equipped with irresistible attraction will catch and devour anything that passes as a spider’s web would catch a gnat.  I did not really know any more when “The End” appeared than I did before the title appeared, as for one thing I didn’t see of what use it would be for a man to know that and for another thing, I had the impression that the whole thing was a spread of hypotheses, premises, theories, etc., to which no one can oppose anything since what we are capable of knowing in this field by our human senses is null, and I fear that the technical means available to astronomers allow them only to come to deductions as captivating but also uncertain for the adult mind as a fairy tale is for a child’s mind.

However this image of a black hole enables me to use an image which I think is accurate: The Word, as I received it during the supernatural events in 1974 and 1977, is a kind of black hole.  A kind of black hole that caught my attention, was heard by my ears, noted on paper with a pencil held by my fingers, like the invisible power somewhere in the firmament attracts that which approaches its attracting force.  I believe that what remains: The Revelation of Arès, is an imprecise but fantastic signal that we should follow as a guide, a Saviour, even if it is only a small lifesaver in the celestial ocean, that we must consider with intelligence (RA32/5) through our weak means of understanding.  Minuscule but sure knowledge is better than enormous knowledge that is false or of no use.  Salvation be it postmortem presently or earthly after the Day (RA 31/8) stems from penitence and not knowledge, full knowledge being impossible.  With an even step, tirelessly, with no other words than those of our calls to the world, we are on our way, knowing few things, but knowing only sure things, we follow the Source’s shore, on the goat path of Life.