We ate one of the mystery squashes which I think is a Malabar gourd (Cucurbita ficifolia).

The attempted weigh in the garden was way off.

I steamed the whole thing.  Why did I think two people needed two kilos of squash?  The extra was prepared as a gratin and stuck in the freezer.  There are more of these squash in the garden which I plan to save as winter squash.

Three days ago as I was passing by the Swiss chard, something caught my eye.  I did a double take or multiple take, since I took several photos.  Blue mushrooms?  Are they really blue or starting to rot?

Three days later, they have grown so no, they are not rotting.  Another mystery to be solved.  What kind are they?

A man gave me a potato at a plant swap back in May.  He said it was productive, a good keeper, not susceptible to mildiou and the seed spuds sell for a pound each in England.  He said the name of the variety but they were not words I could understand in one go.  In English with an accent?  Some other language?  I felt like Jane under the beanstalk.  Now I have harvested them and the one little potato produced 4 big ones and three little ones.  I put two aside to grow next year.  Can anyone help me with their name? 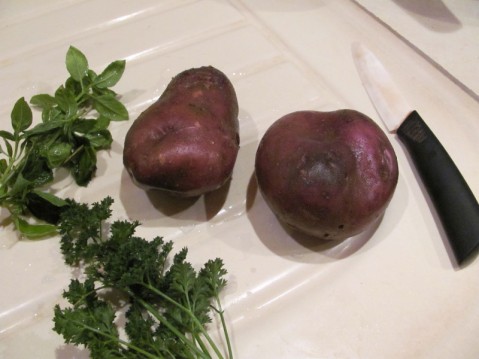 After being washed, before being cooked

Boiling was probably not the best choice of cooking method.  They sort of fell apart.  I guess they can be classed as mealy.

On another subject, I don’t know if there is something in me leftover from previous Inktobers (I may be acquiring a habit) or if it is in preparation for this coming Inktober, but here is a small sketch, very haphazard and incomplete.  I added the colour at home.

A5 Staedtler pigment liner 0.3 and watercolour

“…Who today has the nostalgia of Good which is the air given off by spiritual life when that life is Beauty (RA 12/3) ?  Hardly anyone.  We* do, yes, but we are boring, “has-beens”; our gravitational force for the moment is near zero.  In a world where anything goes, except if you attack a bank(s) or commit murder(s), good and bad the same, the result is a general slackening.  Our missionaries, except for rare exceptions, only encounter wishy-washy hordes under the orders of general ideas, the common mentality.  Who sees that only penitence, the return to active Good in the heart of one’s self raises man above himself and causes him to once again be made a god (RA2/13)?  Who puts Good above goods?  The powers that be have done their best to make Good disappear, Good which exercises too great a gravitational force on hearts, Good and hearts being non-taxable, whereas goods attract taxes, goods are super-taxable.  Goods are a super-useful reality.  Good is only useful to men of Good and what can leaders (RA16/1) and their black dogs (RA xliii/11) or dogs with black tails (RA xlv/1) do with men of Good?  Yet there is no nobler position than that of a man of Good!…”

Deep Cause of Terrorism

“The deep cause of Muslim terrorism is not religious. It’s hate for western civilisation.

But this problem is replicated by another: We westerners don’t love ourselves either.  Our missionaries are quite conscious of this reason buried deeply beneath other arguments.  The people they meet don’t love themselves/each other, don’t expect much from themselves, in other words there is a painful general apathy.  Should I say a general depression?  …  I am going to tell you why they feel this disgust or general apathy.  It’s because they have completely lost sight that mankind has a much greater need for grandeur, interior beauty (RA 12/3), superior ideals, magnificent, of heroism (RA xxxv/4-12), love for one’s neighbour, forgiveness, true freedom, than for social security.  That is what The Revelation of Arès reintroduces into our minds and that is what we seek to reintroduce to the public mind by assembling a small remnant (24/1) of heroes who go into the streets to remind humanity of this.  Yes, we must fish out our beautiful ideals, particularly those of The Sermon on the Mount, from the gutters and sewage pipes where they have been abandoned.”

The Leaning Tower of Bagels

Today I will be babbling about bagels.  Again.

For several months a new business was awaited which promised bagels but when they opened, in spite of a window full of bagels, they would not sell a plain bagel and they didn’t have any butter (even though this is in Brittany).  It turns out they only have a limited number and prefer to sell them garnished (better profit).  It was probably another case of “if looks could kill” on my part.  I need to get rid of any animosity I may still harbour.

I do know how to make bagels.  It’s just nice sometimes to instantly satisfy a hankering with one single bagel.  Now I will have to be disciplined and put some in the freezer.

Once again, the proof is in the chew and these come out way ahead.  However their belly buttons seem to have disappeared.

That Does Not Compute

Would you rather have double chocolate or vanilla?

My husband returned from the freezer with a dark brown box containing ice cream-cicles. The outside was dark chocolate but when we bit into them, they were the vanilla ones.

A couple of days later, we tried again and when he returned with a box dressed in spotted animal skin, pink and gold, I immediately understood our previous error. That does not correspond to my image of double chocolate. Neither did the contents for that matter. The outer coating was milk chocolate, there was an inner layer of chocolate-flavoured syrup and the ice cream itself was a very light sepia shade of beige.

Spotted skin (maybe hyena, let me laugh), pink and gold make me think of 1950’s, red lipstick, kitsch, late night movies, boudoir. I was curious what these graphics would evoke for others, so I asked my friends on facebook what do you think was in this package, posting this image: 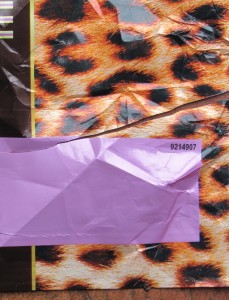 This confirms my conviction that a marketing error was made. Not to mention the name of the product. What percentage of chocolate would you expect in something called double chocolate? In all fairness I should say that I usually eat Lindt 85% so we are talking about serious chocolate taste and not flavoured sugar in my case. 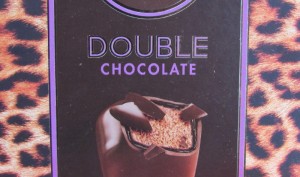 In real life, the ice cream was paler, at least to my eyes.