Saying this over before I go to the store should help.  🙂 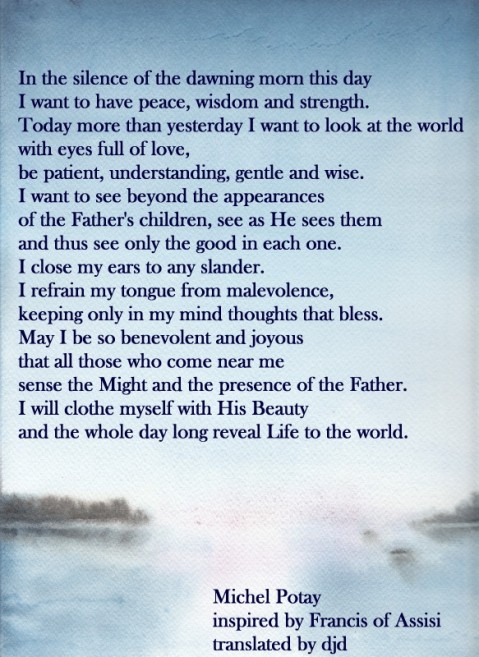 A piece of cardboard with a coat of gesso. It was an old piece that had some glue on it.

Acrylic turquoise mixed with blue and some yellow.

Assembling elements from supermarket ads and Ikea catalogue and something I saved from a Coulommier cheese.  🙂

I could only find half of a potted plant so I created the other half of it with modelling paste. 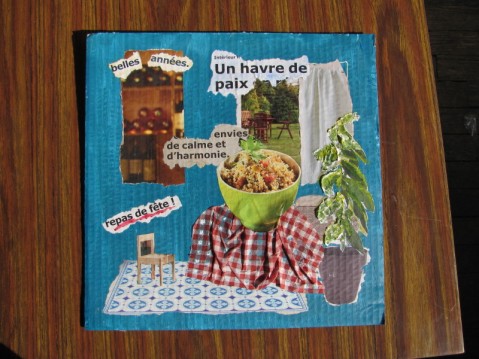 Painted the plant and dabbed on some white acrylic where the blue was showing through the tablecloth too much. Toned down the white paper of the texts with watered down acrylic.

Poured glue on, spread with spalter, then applied tissue paper. Smoothed it somewhat, but the paper is fragile and tears if messed with too much. Waited for it to dry.

Glued the tissue paper edges to the back. Used some Caran d’Ache watercolour crayons to intensify the blue, define some shapes and shadows. Added a bit of gold acrylic.

When something appears to be more or less inevitable, one begins to go along the lines of making the best out of it.

I have been thinking about “that wall”.

I think it should have doors.  A lot of doors.  Maybe the doors could double as mile markers.

I think it should be double, two-walled, so that buildings could be put in there.  Businesses, educational facilities, cultural venues.

On top there should be solar panels.

The funds could come from the military budget.  I believe eventually the military should be transformed into a workforce for the collective good anyway.  Why not start here?

A border should be a place of peace and prosperity, friendly exchanges. 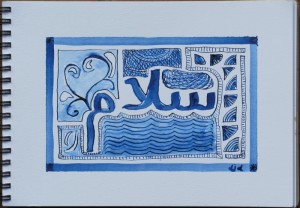 How do you like the border on this one? The word in Arabic is salaam which means peace.

And the servants of the Most Gracious are those who walk on the earth in humility and when the ignorant address them, they say “Peace!”   Al Qur’an 25:63

To be perfectly clear, I find it inconceivable in this day and age to build walls/barriers to prevent people from freely circulating. The whole earth belongs to the whole of humanity. 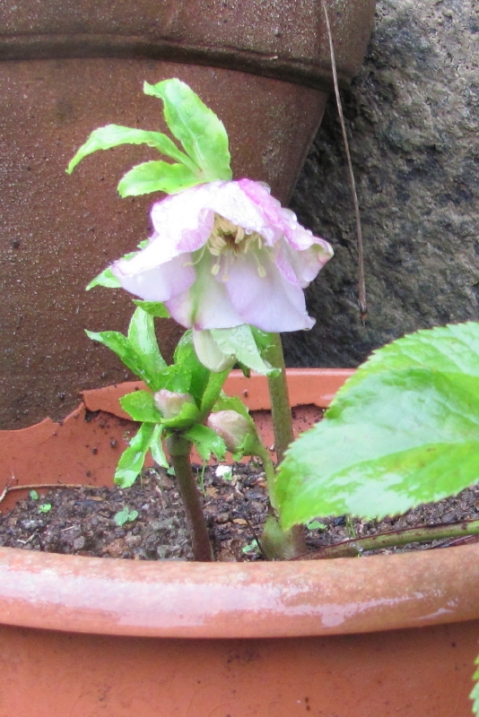 Hellebore blooming   I was shocked by what I heard on the news this morning via one of our local radio stations (I thought they were more or less independent but now I realize they go right along with the system).  They informed us that measures of heightened security will be taken at the Breton […]

A Few Thoughts About Current Events

Today’s principle seems to be “kill the killers”  but if we follow through on that, won’t we have to kill ourselves?  Aren’t we killing a part of ourselves every time another human being is killed?  We are all part of humanity, made up of creatures to which were given specific divine gifts, a spiritual nature.  We are at a time of crisis in the history of humanity for we risk losing this nature since it needs Good to thrive.

The Middle East today seems to be some horrific type of men’s playpen where they get out all their war toys and see what they can do.  Everyday it seems another country has joined the “game”.

“A search for belonging, purpose, adventure and friendship appear to remain the main reasons for people to join the Islamic State, just as they remain the least-addressed issues in the international fight against terrorism,” the report states. (report prepared by the Soufan Group.)

Surely we could find ways of meeting these needs of our fellow human beings other than going off to war.

A minor detail perhaps, but I have not heard anyone mention the effects on the environment of all these bombs, all that ammunition, even just in the streets of Paris.  Do they clean that up?  Do they count on the rain to wash it away?  But there is no “away”.

Why do they “explode” the terrorists?  How can we find out why they did such a thing if they can no longer talk?  How can they come to their senses and express regrets, perhaps dissuading others from doing such things if they are no longer among the living?

It’s not easy going.  It’s no fun un-knitting stitches crossed two by two.  I was starting to question whether or not I am too old for this project.  I was even having trouble telling left from right.  I realized it depends on if you are referring to where the stitch is coming from or where it is going.  Yes, I no longer knew whether I was coming or going.  I decided to concentrate on where I am going.  It’s not a pair of socks yet but it’s starting to resemble something.

It’s the same for changing the world.  We must set our project and work towards it, decide where we want to go.  I choose recreating Eden.  Our Creator says four generations will not be enough.  We must not give up.  I hope my great-grandchildren will start seeing noticeable change, but that depends on us plodding on.  We need more transparent non-sheep who no longer go baaaaaaaaaaa. (see previous post on August 4th and comments)  We need more penitents, those who are changing themselves, recreating themselves Good, in a counter-current to culture, tradition, the media, the herd of the mass.  Can we un-knit wars, conflicts, ill feelings, strife, not only in foreign places but in our daily lives?

“The Lord’s justice will dwell in the desert, his righteousness live in the fertile field.  The fruit of that righteousness will be peace; its effect will be quietness and confidence forever.  My people will live in peaceful dwelling places, in secure homes, in undisturbed places of rest.”

A Few Moments of Peace

The sun came out so I decided to go make some vitamin D.  I went for a little walk down by the river.  I found the sights and sounds to be so peaceful.

On the way back up the hill, I saw three different red fruits in the same space.

There are rosehips, some kind of vine fruit and euonymus (sorry, the common English name escapes me at the moment—bishop’s cap?).

Back in my own garden I looked for some greens for lunch.  There has been a spurt of growth of the dandelions.  Their rosette makes a bit of a hollow place where leaves collect.

This does an auto-blanching.  Clear them away and you have some nice tender greens.

Then I noticed something very strange.  It must be some sort of fungus.

On Saturday, we attended the official ceremony at the old town hall.  Speeches were interspersed with a mandolin orchestra and our singing.  A European deputy spoke about how they had put into place the structures for creating this sort of link between people, but that it was up to us, each citizen, to do the actual work.  The part about it being up to us is true, but I think we could manage without hierarchy or structure imposed from above.  Everything was given in German and translated.  The man who did most of the translating had been a French teacher.  One of his former students said he wished he had been allowed to translate so freely when he was in class. (much laughter)

This was the 35th anniversary of this twinning.  Some people have been participating from the very beginning, creating strong friendships.  It is a good thing to work in the direction of friendship, especially since there was previously so much hate during the wars.

The hors d’oeuvres served afterwards were excellent.  I especially liked the ones with smoked salmon, dill and cucumber.  We walked around the town a little while and then got on the bus for a short ride just outside of town where we went for a hike.  Many plants were familiar.  The trees are taller, not used so much for firewood as they are here in Brittany.

In the evening was a BBQ.  They have picnic pavilions and large pits.  There was a coleslaw, but not with the type of dressing we have in the States, plainer, very good. Some tensions were beginning to show.  We are all just human beings and not everyone thinks about being penitent which is questioning oneself, working to change so as to be and do good, practicing love, forgiveness, peacemaking, freeing oneself from prejudice.

All in all, it was a good weekend and I hope we contributed towards building world peace, fraternal love between all peoples, recognizing values that transcend culture, practicing that which constitutes our spiritual nature.

Facing the prospect of an 11 hour bus ride, one way (which actually turned out to be 12 ½ hours), to keep myself out of mischief, I packed my Barbie doll, all her clothes and a valisette of Matchbox cars—non!—  I packed a couple of sticks and some brightly coloured thread.  The main body of a rainbow moebius is now in place.  As I work on a border, I mull over the weekend and what shall I write about it.  In any case this non-scarf will be a good souvenir of a weekend devoted to creating bonds between fellow human beings.

November 11th is a holiday in France.  A few stores may be open in the morning but in general people have the day off.  This year many managed to have the Friday off also.  In our village there is a ceremony with flags and speeches and a flower arrangement being placed at the base of the memorial for those who were killed in war.  The speeches emphasized the horror of war and the hope for lasting peace.

It was pouring rain this year, most were sheltered with umbrellas and we did not tarry on the square but entered the one town establishment where drinks and nibbles were waiting for any residents of the town who cared to attend.  I was next to a woman who told me about when she was in grade school in a neighbouring town and it was bombarded.

Later as I shared this with my husband, he asked which side had bombarded the town.  I didn’t know and was thinking about that when I realized that in a split second many thoughts had crossed my mind: which side, who were the “bad guys” this time, to  whom should we attribute a black mark, oh, aren’t they awful…  Suddenly I thought it doesn’t matter which side did it.  Some human beings bombarded some other human beings.  That is horrible enough without any further details.  As we commemorate the end of these ghastly world wars, we still have not put world-wide enduring peace in place.  We still bombard each other with domination, exploitation, unfairness, nasty remarks, all kinds of behaviour other than love.